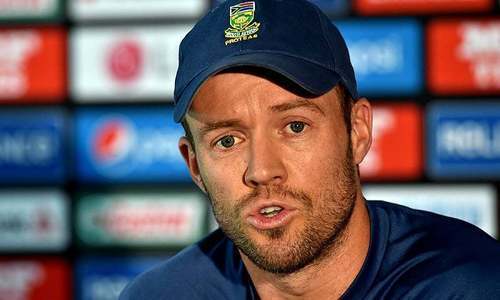 Legendary South African batsman AB de Villiers has announced that he will be visiting Pakistan in March as part of the Lahore Qalandars roster to play Pakistan Super League matches at the Gaddafi Stadium.

I am delighted to confirm that I will represent Lahore Qalandars in front of our home crowds on 9 and 10 March, during the HBL PSL 2019," PSL-T20 quotes De Villiers as saying. "I look forward to revisiting the Gaddafi Stadium and aim to play my part in helping Lahore Qalandars achieve something they have been aspiring for since the inception of this tournament in 2016

De Villiers said he has fond memories of his last tour of Pakistan that came more than a decade ago. "I am fully aware that cricket is like a second religion in Pakistan," he said. "I still remember the support and appreciation we received in 2007. Furthermore, I feel I have a role to play in helping international cricket return to Pakistan. These have been some of the motivating factors for me to return to Lahore."

As expected, team owner Fawad was a happy camper after De Villiers committed to visiting Pakistan. “There can’t be a bigger and better news for Pakistan cricket fans and the HBL PSL 2019 on the day we are celebrating ‘one month to go’ that AB de Villiers has confirmed his availability for the two Lahore matches.

“De Villiers is one of the icons of international cricket, who has entertained his fans world-over, not only with his innovative and aggressive batting, but also with the flare, passion and agility that he always carries with him onto the field of play.

“I am certain he will further brighten the Gaddafi Stadium with his amazing talent and skills on 9 and 10 March and this good news is a gift for our Qalandars clan.”

“We appreciate the decision of AB de Villiers and look forward to welcoming him to the home of Pakistan cricket. I am sure de Villiers’s appearance will attract new fans, and more eyeballs will follow the HBL PSL than ever before," Mani said.

“I am confident that de Villiers’s decision at the back of his fellow World XI, Zimbabwe, Sri Lanka and the Windies’ cricketers’ decisions to play in Lahore will encourage other leading cricketers and international sides to visit this cricket-passionate country.

“For the Lahore crowds, it will be a great opportunity to watch this generation’s cricket genius live in action. I am sure they will turn up in great numbers to support de Villiers as well as Lahore Qalandars and their opponents.”

Mohammad Hafeez, the new Qalandars skipper was just as ecstatic, adding: “De Villiers is one of the most respected cricketers in the world. He is a proven performer, who has added new dimensions to batting in white-ball cricket.

“Not just me but the entire Lahore Qalandars side will wait eagerly for the unique experience of sharing with him a flight to Lahore and then being in the same team kit in front of what I envisage will be a packed house.

“This will again be an opportunity for the Lahore crowds to show their passion, respect, love and hospitality, and I am confident that AB will take home memories which will bring him back again and again to this beautiful piece of land.”

De Villiers' announcement comes a day after The Sydney Morning Herald reported that Australia will not be coming to Pakistan for a one-day series scheduled to be held in March-April.