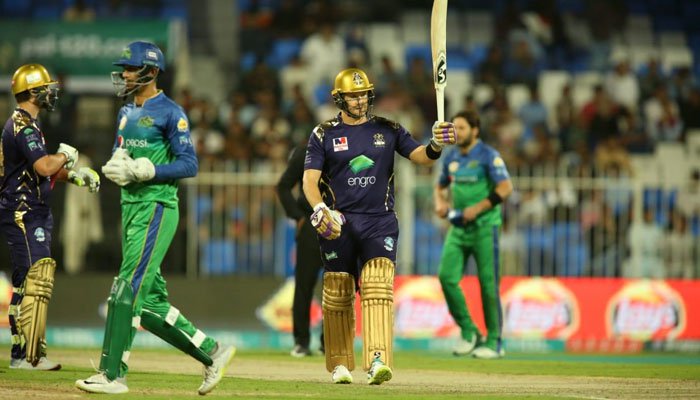 Quetta Gladiators achieved the target of 122 runs in the 19th over.

In the match played in the Dubai Cricket Stadium, Quetta Gladiators won the toss and invited Multan Sultanz to bat first.

Despite squitting Multan Sultan's wicket, captain Shoaib Malik tried to handle the team, but he failed and the whole team scored 121 runs.

Sultan Hussein, 46, and Shoaib Malik were 21 for 21 when Multan-e-7 players were unable to enter the double format.

Sohail Tanvir and Davey Bravo of 3, 3 when Mohammad Nawaz 2 and Mohammad Hassanin out of a glimpse by Gladiators.

In the pursuit of 122 runs of Multan Sultan's goal, Quetta's Gladiators' innings started by Shane Watson and Ahsan Ali, and both of them bowled in confidence, but Shane Watson scored 33 runs on the 49-run target.

The second wicket of Ahsan Ali, who made 17 runs while Pallin returned, took Ahmed Shehzad and Rally Rose for 48 runs in the third wicket, but Ravi scored 35 runs for the target score of 103. Akmal also scored no runs without any runs.

Quetta got 122 runs at the loss of 4 wickets in the 19th over when Sarfraz Xi made a place in the final for this success.

Shahid Afridi made 2 and Mohammad Elias out of Multan by Multan Sultan.

After the defeat of Multan, access to the next phase has become difficult and the points are present at the last position.