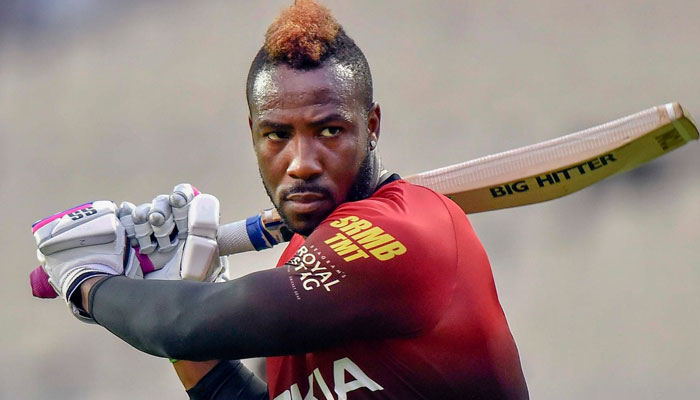 West Indies Andrey Russell returned home due to a sudden involvement in his national team for the final match of a one-day series against England. According to details, another bad news has been reported for the most disappointing performance of Multan Sultanz in the far-run matches in Pakistan's Super League 4.

Multan Sultanz's highest score has left the foreign player with the team. Multan Sultanz part of West Indies Russell Russell has returned home due to a sudden involvement in his national team for the final match of a one-day series against England. Andrey Russell will not be a part of the match of Multan Sultan and Islamabad United tomorrow.

On the other hand, Pakistan Super League 4 (PSL) failed to face Multan Sultan's team caught in new trouble and was fined due to a higher return rate.

Multan Sultan's team against Peshawar Zalmai was behind two overs in the fixed time and was admitted to the League's Code of Conduct, which was fined by the match by the bright Mahanama. 10% on all team players and captain Shoaib Malik has been fined 20% of the match fee, and in this season, if they commit this crime again, they will be double penalized.

Remember that in the fourth edition of the Pakistan Super League (PSL), Peshawar Zalmai beat Multan Sultanz for 5 wickets. The pacer Zalmai scored 146 runs at the loss of 5 wickets at the last ball of the last over. In the match played in the Featured Stadium, Peshawar Zalmai won the toss and invited Multan Sultanz to bat. Ummal Siddiqui and Younis Siddique and James Wins started the innings, but did not run without any runs. After which Omar Siddique and Charles supported the team with the help of 80 runs.

After the age of 81, Omar Siddique was out, the remaining 8 players could only score 64 runs. Sultanzee scored 145 runs in the 20 overs with Johnson Charles 53, captain Shoaib Malik 22 runs. Hasan Zulfiqar 4, Sammy Gul, Waqab Riaz, Umeed Asif, Lem Dau? ¿Nisson, one one out, took one of the players. Peshawar Zalmai's innings started in the pursuit of 146 runs in the batting of Sultanana Sultan. Imam ul Haq and Kamran Akmal did but Kamran Akmal scored 4 runs in the first over.

In the second wicket partnership, Imam ul Haq and David Milan stabilized the team position by 68 runs, but the 74-run match scored 38 runs. Peshawar Zalmai scored 146 runs for the loss of 5 wickets at the fourth over of the last over. From Peshawar, Imam ul Haq 52, David Melanie 38 and Polard were 25 runs with 25 runs. Junaid Khan and Daniel Cristine scored two runs from the Sultans. Hasan Ali, Peshawar Zalmai's Hasan Ali, was awarded the Man of the match on the stunning bowling.