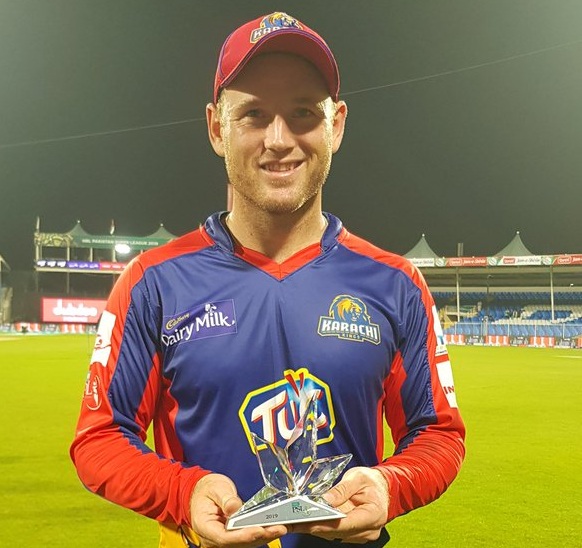 Former South African batsman Colin Ingram notched the highest individual score of PSL history to lift Karachi Kings from the jaws of defeat to pull off a six wicket win over Quetta Gladiators in Sharjah on Sunday.

Ingram smashed eight sixes and a dozen boundaries during his epic 59-ball 127 not out as Karachi Kings overhauled a target of 187 with eight balls to spare and hand Quetta their first defeat in five games.

With 16 needed off last Anwar Ali over, first Ben Dunk (15 not out off nine balls with a six and four) hit a six and then took a single to allow Ingram hit a boundary and then sent the ball sailing over long-on to leave Quetta stunned.

The win lifted the gloom in Karachi camp as they registered their second win in five matches and after three defeats in a row. They are now fifth in the table, which Quetta continued to top with eight points after five games (four win and one defeat).

With 114 needed in the last ten overs and Karachi losing grip, Ingram cut loose. He hit two boundaries and a six off pacer Ghulam Mudassar and smacked three sixes off spinner Mohammad Nawaz to bring the target down to 54 in last six.

He took a single off Sohail Tanvir to bring up the joint fastest hundred in all HBL PSL editions. Islamabad United's Sharjeel Khan scored a hundred against Peshawar off 50 balls in 2016.

This becomes the first hundred in HBL PSL by a foreign player. Peshawar's Kamran Akmal has scored the other two hundreds in the HBL PSL editions.

Chasing a daunting 9.35 run-per-over target Karachi were in tatters at 4-2 as they lost their key batsmen Babar Azam off the very first ball, playing straight into the hands of covers off Sohail Tanvir. Colin Munro fell to another low score as he punched a long hop from Mohammad Nawaz to square-leg.

Ingram added 50 for the third wicket with Awais Zia who made a laborious 21-ball 19. Ingram reached his first fifty off 31 balls -- Karachi's only third in five matches -- with a boundary.