PSL NEWS -->> 10th Twenty of P.S.L Between will be played Lahore Qalandars vs Multan Sultans at 5:mp in sharjah stadium dubai 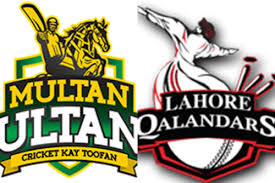 10th Twenty of P.S.L Between will be played Lahore Qalandars vs Multan Sultans at 5:mp in sharjah stadium dubai

It will be the fourth match in the event for the two teams as both have already played three matches each. Lahore Qalandars played all their three initial matches in Dubai; won one and lost two whereas, Multan Sultans played their first two matches in Dubai and the third in Sharjah.

After losing their first match by five wickets to Islamabad United on February 14, Lahore Qalandars emerged victorious by 22 runs against Karachi Kings on February 16 but they lost their third match to Peshawar Zalmi by seven wickets on February 17.

Multan Sultans also went through the same fate as they lost their first match to Karachi Kings by seven runs on February 15 and then recorded a five-wicket victory against Islamabad United on February 16, and later they were outclassed by the consistent winners, Quetta Gladiators by eight wickets on February 20 in Sharjah.

The highest totals so far by Multan Sultans is 176-9 (vs Karachi Kings) and by Lahore Qalandars 171-8 (vs Islamabad United).

Veteran cricketer Shoaib Malik, who is captaining Multan Sultans, has consistently been scoring runs and is the leading run-getter for his team and with 136 (ave 68.00) in three matches with two fifties. He is second among the four batsmen, who have so far scored 100 runs and above in PSL4. The highest scorer for Lahore Qalandars is Fakhar Zaman who has made 97 runs in three matches.